Summary: Terry describes his life growing up in Ames, his initial marriage to his wife with whom he had two children (who now both identify as LGBT as well), coming out in his late 20’s and subsequent divorce. His husband of 40 plus years, Mark, occasionally adds commentary as Terry discusses adopting two children with Mark in 1990, their various enterprises, and experiences together. Terry also talks about his activism, particularly within his church, the Unitarian Universalist congregations in Ames and in Des Moines. Content Warning: mentions of suicide and death.

Place of Birth: Both were born in Iowa

Occupation: Gayla works at Progress Industries and Cindy is a retired Nurse

Summary: Gayla Snook and Cindy Pollard are life-long Iowans. In this interview, Gayla and Cindy tell their story of Iowa legalizing marriage equality in 2009, and the planning of their wedding that occurred a year later. They are active in politics, canvassing for politicians and have met many candidates. 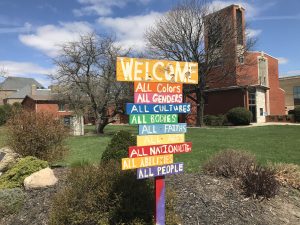 Summary: In this group interview, LGBT and allied parishioners of the Grinnell United Church of Christ reflect on how perspectives on race and sexuality have changed locally in the church over the years, what it means to be an Open and Affirming congregation, experiences being allies to LGBT people generally in Iowa, and more.

The views and opinions expressed on individual web pages are strictly those of their authors and are not official statements of Grinnell College. Copyright Statement.